Buy your house with grand design at very reasonable price

" Modular homes are becoming increasingly common in the English and Japanese urban areas. " 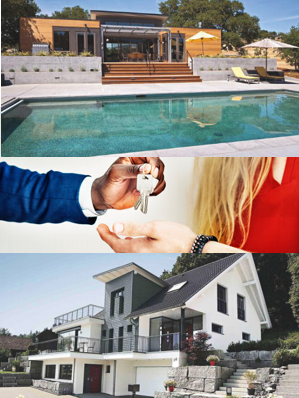 Less than 30.000 pound home built from six hours to 2 weeks, incredible to be true.
With all the new technology and modern design the exterior at least can usually be installed on-site within three or four days.
Modular buildings and modular homes are prefabricated buildings or houses that consist of repeated sections called modules. "Modular" is a construction method that involves constructing sections away from the building site, then delivering them to the intended site. Installation of the prefabricated sections is completed on site. Prefabricated sections are sometimes placed using a crane. The modules can be placed side-by-side, end-to-end, or stacked, allowing a variety of configurations and styles.
Modular buildings, also called prefabricated homes or precision built homes, are built to equal or higher standards as on-site stick-built homes. The building method is referred to as permanent modular construction.
Material for stick built and modular homes are the same. Modular homes are not doublewides or mobile homes. First, modular homes do not have axles or a metal frame, meaning that they are typically transported on flat-bed trucks. Modular buildings must conform to all relevant local building codes, while doublewides and mobile homes have metal under framing.
The materials used in modular homes are typically the same as site constructed homes. Wood-frame floors, walls and roof are often utilized. Some modular homes include brick or stone exteriors, granite counters and steeply pitched roofs. Modulars can be designed to sit on a perimeter foundation or basement. In contrast, mobile homes are constructed with a steel chassis that is integral to the integrity of the floor system. Modular buildings can be custom built to a client's specifications. Current designs include multi-story units, multi-family units and entire apartment complexes. The negative stereotype commonly associated with mobile homes has prompted some manufacturers to start using the term "off-site construction."
One of the big advantages of prefabs is that they offer huge flexibility with the properties being built off site and then installed within a matter of days on-site, often to the requirements of the owner (for example, buyers may decide to divide the space into three smaller bedrooms instead of two larger ones).
The chief problem, as with any self-build project, is finding the land to put one on. Clear building plots are almost impossible to come by in popular areas of the south of England and even in less in-demand locations they can be tough to find.
That means that many self-builders opt to buy an existing house and knock it down to make way for their project. The downside to this is that it is expensive, however, the potential cost and time savings of a prefab will help keep those bills down slightly.
Once you've got your plot, you need planning permission. A striking modern prefab is likely to stand out from neighbouring homes, however, planners may look favourably on its design status. It would be wise to find a local planner to speak to and get a steer on your council's thoughts.
Some home buyers and some lending institutions resist consideration of modular homes as equivalent in value to site-built homes. While the homes themselves may be of equivalent quality, entrenched zoning regulations and psychological marketplace factors may create hurdles for buyers or builders of modular homes and should be considered as part of the decision-making process when exploring this type of home as a living and/or investment option. In the UK and Australia, modular homes have become accepted in some regional areas; however, they are not commonly built in major cities. Modular homes are becoming increasingly common in the English and Japanese urban areas, due to improvements in design and quality, speed and compactness of on site assembly, as well as due to lowering costs and ease of repair after earthquakes. Recent innovations allow modular buildings to be indistinguishable from site-built structures. Surveys have shown that individuals can rarely tell the difference between a modular home and a site-built home.
The initial expense of this would hopefully be offset by the quick build times and the ongoing energy savings from living in a highly-efficient home.